The primary aspects of this speaker are the endurance or battery life, connectivity, and the quality of sound.

For the battery life, the testing was set up in room hovering around room temperature (we do not want to do an overkill, but the temperature may impact battery life, especially lithium-ion and lithium polymer batteries). The Sony SRS-XB41 was placed at the center with the phone, in this case, a Samsung Galaxy S10 at 10 feet blasting Bluetooth towards the speaker.

The phone was connected to a power brick throughout the duration of the testing to prevent any interruptions in the testing arising from the phone. The volume was set at a mere 45-50 percent. All the other bells and whistles on the speaker have been turned off, which include the flashy LED lighting and Live Mode. The test was conducted until the speaker was unable to broadcast audible sounds at which point it was deemed that the speaker’s battery was completely discharged from any usable voltage.

As for connectivity, it was conducted in a grass field (Sony does expect the SRS-XB41 to be used outdoors more often). Placing the Sony SRS-XB41 in a spot, it was connected via Bluetooth to the same Samsung S10. A linear path was created from the speaker extending outwards. The path had a maximum length of 100 ft., more than enough for what Sony had advertised at 30 meters or about 98 ft.

Unfortunately, a proper anechoic chamber was unavailable at the time of the testing. While a chamber was not made available, technology has made it so that frequency response could still be measured using acoustic measurement systems. The results will not equal that of a true anechoic chamber, although, for our purposes, it would be deemed as good enough. There were also “audiophiles” that had listened, although subjectively, to the output of the speaker and had given their opinions.

All tests were conducted within a single day. While it may seem that the testing is somewhat of an overkill, the tests were made to ensure nothing but the best results for the consumer or the audiophile who is reading this review. While far from quantum scientific accuracy, we have made it close enough for the satisfaction of the common consumer. 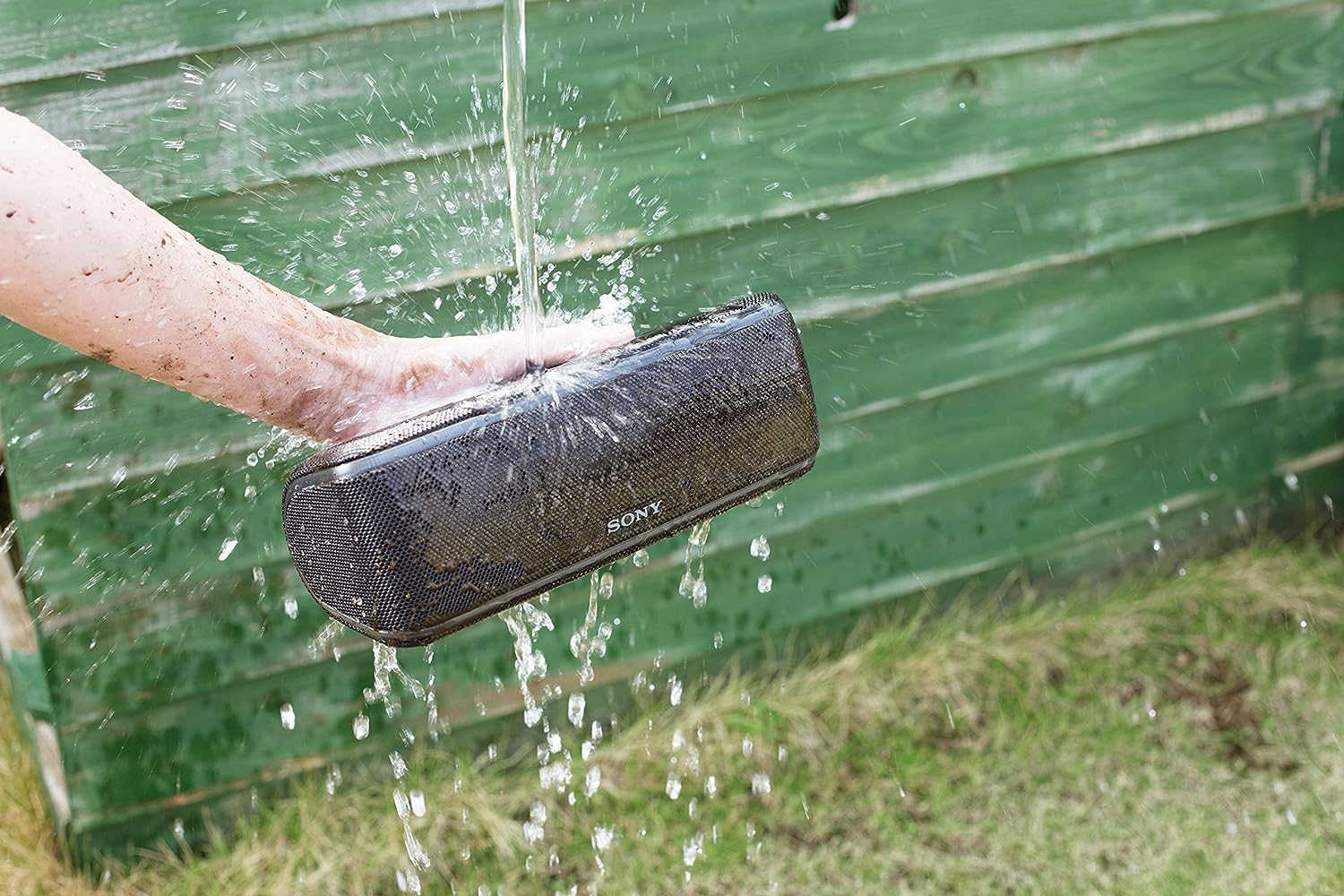 The Sony SRS-XB41 is a speaker that does not “reinvent the wheel” but is a fantastic wheel. The SRS-XB41 is a wireless Bluetooth speaker created by Sony that seems to scream “cool” right out of the box. The entire speaker is 11 ½ inches long with around 4 inches of width and height. The SRS-XB41 feels like it was built like a tank with a hefty weight of 1.5 kg or around 3 lbs.

As tested, the SRS has good batteries. While it is advertised with a 24-hour battery, we have found it to be closer to 19 hours. Connectivity was also below advertised, and ranges at only 86 feet.

The weight is not just dead weight; either the entire speaker is rated IP67 certified, which makes it able to withstand water and dust ingress TLDR: Dust and waterproof up to a depth of 3 feet for up to half an hour. Because of the certification, the SRS-XB41 can be utilized as an outdoor speaker. Sound is not a problem as 80 percent volume is more than loud enough for most outdoor uses. People who want to party outside or carry the equipment to the beach for a late-night party can certainly enjoy the SRS-XB41 without having to think of the splashing sea.

This speaker was not just built like a tank, it was also built to impress. Upon opening up the speaker, you will be greeted to a kaleidoscope of colors. The speaker’s body has an LED trim along with lights on each speaker itself.

Sony may advertise the speaker as that for the professional, audiophile, or simply people wanting a pleasant experience with a premium speaker. The SRS-XB41 is certainly a good buy for people wanting a premium speaker as its build quality alone is more than enough. For professionals and audiophiles who want the utter best in terms of the listening experience, you might want to hold out for this. For the same price or the same tier, there are more speakers in the market that are geared more for the professional and audiophile market. There are many choices in the same tier that have features geared more towards the professional market that are well worth the asking price.

Sony has stepped into the waters again of wireless speakers. An iterative response to their old line of speakers, the Sony SRS-XB41 is marketed as a top of the line prosumer gadget that will give the best experience and performance.

At a glance, the SRS-XB41 is seen as the “cool” gadget that may have more bluff than authentic. All are out on the line and the entirety of the SRS-XB41 will be put to the test. Does this speaker have the guts that Sony has claimed it has?

First things first, the Sony SRS-XB41 is a wireless speaker. The speaker’s primary connectivity is with Bluetooth, in this case, Bluetooth version 4.2. Bluetooth version 4.2 is certainly not the same as version 5.0 that is carried around by things like the Samsung Galaxy S10 but for daily use, 4.2 is not much different from 5.0. The existing Bluetooth version of the SRS-XB41, while being old, makes it possible to chain together multiple speakers up to 100 (given that you can, and you would want 100 SRS-XB41s).

The SRS-XB41 is capable of NFC connection, although its uses for this device are limited. Also It is capable of using Sony’s Fiestable App which allows for the control of the LED lights surrounding the speaker as well as the DJ effects.

As for the sound, Sony has packed two notable features into the SRS-XB41. The first is Extra Bass which increases the bass for the speaker to ludicrous amounts at the cost of the mid-range. There is also Live Sound which is present in many Sony speakers, which make for a “360-degree” listening experience. Live Sound may be advertised as a 360 experience, but the lack of side facing speakers does not truly recreate a 360 experience.

On the other side of things, Sony has advertised the SRS-XB41 as having a long battery life of up to 24 hours. Sony is so confident of the battery capacity of its speaker that the SRS-XB41 can double as a power bank to charge your mobile phone and other devices.

So, far Sony has made sure that the SRS-XB41 has a lot of bells and whistles to present. But are these features of the SRS-XB41 adding to the value or not, is up for debate.

So far, the SRS-XB41 is a well-rounded product, but it does have some kinks that might have been done better.

The buttons and the app included by Sony makes it almost a no brainer to use the device out of the box.

While we see a lot of features, it is not quite sure if these features are well worth it.

Sony has a lot of difficulties in customer service but lately, they have been good with customer support and technical support.

For audiophiles and professionals, the SRS-XB41 may not be worth the price tag as there are other offers available. For the high-end consumer, the SRS-XB41 is well worth it.

Sony’s SRS-XB41 is a great and worthwhile speaker. It does not have the features needed for a truly magnificent listening experience, but for the regular person wanting excellent quality speakers, it definitely lives up to it. There were no corners cut but the bass and mid-range need some work to be done.